I began my moderator year for the Presbytery of San Francisco January of this year. My focus for this year is to change the way we meet during our Presbytery meetings. Like most presbyteries, we sit in pews for 5-7 hours listening to reports and voting on important issues. What is clear is that people are tired of meeting this way and often times hate going to presbytery meetings. More and more presbyteries are looking at alternative ways to do business and Presbytery of San Francisco is one of them.

Besides the fact that no one likes going to presbytery meetings, one of the main reasons to change the way we meet is to consider what it does to a faith community. The only reason to come to presbytery meetings is to get in your vote, to fight, and to debate. That’s not really a community building activity.

At a recent council meeting, Leonard Nielson, chair of Finance and Property Committee, shared during his devotional Peck’s thoughts on community in a book called “Road Less Traveled.” Although the book was written in the ’70’s, there is truth to what he says about what it takes to be an authentic community. The characteristics of what Peck calls an authentic community include consensus, inclusivity, realism about the diversity of thought and spirit, trust, and peacemaking. Peck further describes three stages that precede the formation of a true and authentic community.

Stage one is called a pseudo-community. A pseudo-community has the desire to connect with each other while diminishing our differences, acting as if the differences do not matter and avoids conflict or deals with them passive aggressively. I would admit that the presbytery of San Francisco has been a pseudo-community for a very long time. I can’t tell you how many presbytery meetings I’ve been to where during a contentious vote some strong, offensive things were said but done in a respectful tone and people would think that the debate went well because we weren’t yelling at each other.

Stage two is called chaos. This is when the pseudo-community fails to work to keep their differences underground and the members turn on each other, venting their mutual disagreements and differences. It’s chaotic because people can no longer ignore their differences. Ironically, Peck says that chaos is the first step toward genuine community building.

Stage three is called emptiness. After chaos comes emptiness, where people feel a sense of loss and chaos and begin to empty themselves of those ego-related factors like pride, dogmatism, self-righteousness, cynicism, and all the things that have prevented the communities’ openness into a true and authentic one. Emptiness involves letting some things go, letting some things die, and something within each of us die as well. This emptiness and sense of loss is what prepares us for new birth.

The presbytery of San Francisco is between the stages of two and three. It has been a painful and affirming time as well. I’ll admit that my strategy from the beginning has been to create a little bit of chaos into each presbytery meeting. My reason behind that is because we know the game to well. We are programmed to “fight” a certain way. If people are confused including myself then whether you are conservative or liberal, we all have to be open to where the spirit is leading us and pay attention to this new way of meeting.

In the January meeting, I introduced what I called Presbytery speed dating. We had three contentious overtures to vote on (gay marriage, Israel/Palestine, and overlay presbyteries) and instead of having a pro/con debate for each one, we separated the presbytery into three rooms. Each room had one of the overture advocates who got 2 minutes to briefly state what their overture was about. The group had 10 minutes to share in small group any questions or what more information do they need about the overture. And the overture advocate had 2 more minutes to receive those questions and answer a few. Then the overture advocates rotated to the next group and repeated the process. Afterwards we gathered back as a large group and voted on each overture. The motion was framed with the question, “It’s not about whether you agree on this overture. The question is do you feel that this overture deserves more conversation and discernment at GA.” Although people were confused about the process because it was so new, there was an inkling of appreciation that people had an opportunity to gather in small groups to discuss them.

At the March meeting, it was anticipated that the Committee on Ministry report would be contentious because we were voting to accept a transfer of a minister who is openly gay and married. Prior to that report, we spent a good hour and a half in World Cafe conversations. The topics were broad, but all had to do with the work of the presbytery.

Here were the topics: 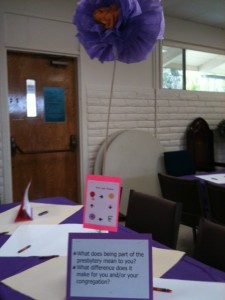 At the purple flower table, participants were asked

What does being part of the presbytery mean to you?

What difference does it make for you and/or your congregation?

At the yellow sun table, participants were asked:

Where is God leading us as a presbytery?

What types of mission might we do better as a presbytery than as individual congregations?

If you were to choose one ministry for us to engage in as a presbytery, what would it be?

Would it be something new? Something we’re already doing?

At the red balloon table, participants were asked:

What do you think of the ideas you’ve heard or experienced for doing presbytery meetings differently?

Are there aspects that seem difficult or confusing?

What would you like to see happen at presbytery meetings?

At the green spiral table, participants were asked:

How does the presbytery best support congregations in doing local mission?

How can we increase awareness of issues that fellow Presbyterians are working on in our communities?

What was hoped for, but completely unexpected was that people would feel energized about being at a presbytery meeting. People were not only energized, but I was receiving comments and emails that people actually loved being at presbytery. I heard it from both sides. Can you believe that? Two words: Love and Presbytery Meetings that are usually antonyms were used synonymously.

I look forward to May, where we will begin to implement Open Space as a part of the business meeting. If you are unfamiliar with Open Space, take a look at this informercial I shared at the last presbytery meeting.