22“No!” the other woman shouted. “He was your son. My baby is alive!” “The dead baby is yours,” the first woman yelled. “Mine is alive!” They argued back and forth in front of Solomon, 23until finally he said, “Both of you say this live baby is yours.24Someone bring me a sword.” A sword was brought, and Solomon ordered, 25“Cut the baby in half! That way each of you can have part of him.” (1 Kings 3.22-25) 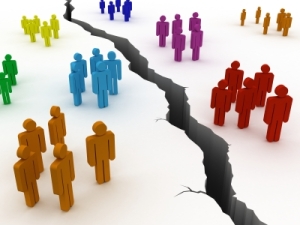 Solomon is approached with a serious dilemma. The equation doesn’t seem to add up. Two mothers. One baby. Declared as an act of wisdom, Solomon decides to cut the baby in half to correct the equation. When tempting to do so, the truth is discovered and the baby is returned to his mother.

While moderating at a recent presbytery meeting, I had a new insight into this particular story. Except in my case, we are not fighting over a baby. We are fighting over a community – the Presbytery of San Francisco community. By name, my presbytery is assumed to be liberal, but in reality we are evenly divided, evenly split and all the players have a high stake in who wins and who doesn’t. Lately, the issues we have been fighting over have been anything that has to do with LGBTQ issues: ordination, sense of call, marriage, sin.

I have been involved in these issues and debates in two roles: one as a member of presbytery and now as moderator. In both roles, I have struggled with how a divided community can truly be an authentic community and yet be affirmed in our different beliefs. Is it possible? If you asked me in January, I would have said ‘no.’ As moderator, I have seen the “ugly” come out of both sides. It stuns me to see how “ugly” we as Christians can be all in the name of Jesus, love, righteousness, and unity.

If I threatened to cut this community in half, who would compromise their side, vote, belief, truth, and perspective for the sake of the health of the community? Right now, the answer is no one. I am part of a wonderful group of leaders in my presbytery who have given so much of their heart, passion, energy, and time to move this presbytery into a healthier place – a task that is daunting on its own and impossible when in the midst of making healthy changes, we still act and treat each other in the same dysfunctional manner.

A few years ago, my presbytery was voting on Amendment B. Amendment B referred to a clause that linked “fidelity and chastity” to standards of ordination for deacons, elders, and pastors. Amendment B was seen as a significant barrier for LGBTQ to be ordained in the PCUSA church. It was late at night and we had heard the exhaustive pros and cons of the debate. I remember holding my sleeping baby in my arms while my husband held my son as we awaited for the written ballots to be counted.  While the vote was being counted, we had communion. To the leadership’s credit, I believe their intent was to gather in “unity” around the Lord’s table, but unfortunately, it was only a stark reminder to many who was not invited to the table. The vote was close like it always is, proving the point that every vote in that room was crucial. The motion to remove Amendment B did not pass and you can feel the tension in the room palpitating. I have to be honest that I was upset. I can feel tears rolling down my cheeks as the vote count sunk in. We were instructed to circle up around the perimeter of the sanctuary for prayer. Then, someone started singing “Amazing Grace.” “Amazing Grace,” really? People who were upset about the vote started to leave the room. I get it. I didn’t feel like praying. I didn’t feel like holding hands with anyone. It took everything in me to stay in that room until that song was finished.

A few weeks ago, on the consent agenda, there was a motion to approve the transfer of a pastor who was openly gay and married. As expected, it was pulled off the consent agenda and placed in the evening’s Committee on Ministry report. There wasn’t as much debate as I thought there was going to be. As moderator, I tried to be fair and respectful. With the song of “Amazing Grace” still lingering in my memory, we made sure that we didn’t plan any “community building” activities that people would deem as manipulative or forced. Although the vote wasn’t huge, the vote was easily determined by visibly counting the raised hands. By a small majority, the pastor was received into our presbytery. We invited him to stand in the middle of the sanctuary so that we could lay hands on him as we would do with any candidate or transferred member. And it was a clear visible sign that most who opposed the vote did not stand up to pray for this pastor. I wasn’t surprised. I will say I was disappointed.

In these two scenarios, I experienced the vote not going my way and the vote going my way. In these two scenarios, I felt what it was like to be in a community where I grieved and where I celebrated. I have watched my colleagues and friends walk out or take a visible stand against. And what I struggle with is can we be a healthy, diverse community or do we have to divide “the baby”?

One thing I noticed about Solomon threatening to divide the baby is that it put both mothers on equal footing. Both mothers were going to lose that baby. In some way, that is my approach to moderating this year. I can’t prevent people from wanting to debate until the wee hours of the morning. I can’t squelch what comes out of people’s mouths. I can’t control how we choose to treat each other. What I can do is maybe change the way we fight. Sorry Robert’s Rules of Order, but we will face each other and not only the moderator when we speak. We will gather around tables for discussion and worship around things we can come together on like mission, ministry, and the future of the presbytery. And by introducing different process modalities and decision making tools, my hope is to equally confuse everyone, including myself, so that we can open ourselves to the spirit of where God is moving instead of holding firm to where we believe God is.

What have you done to build community in your church, presbytery, or family? How have you handled groups with divided interests and beliefs?

4 thoughts on “United We Stand, Divided We Fall”