This summer, I had the pleasure of writing the small group manual for the Presbyterian Youth Triennium (PYT). PYT is a Presbyterian Youth Conference that brings about 4000 youth from all over the US to Purdue University. Throughout the week, youth engage with the theme through worship, small group study, and recreation. The theme was “Here’s My Heart,” inspired by the hymn, “Come Thou Fount.”

“Come Thou Fount” was written by Robert Robinson when he was a teen. You can read Robert Robinson‘s story in a readers’ theatre I wrote up for the small group manual. In the second verse, it says, “Here I raise my Ebenezer.” An ebenezer is a “stone of help,” something that faithful people throughout the Bible would have constructed out of stone when they encountered or wanted to remember God.

Throughout the week, the youth had an opportunity to construct their own ebenezer out of balloons. This idea came from Jon Brown, who was the worship coordinator for the conference. His son, Matthias Brown, who is a brilliant artist, figured out the execution of constructing such an ebenezer. I was challenged with how each of the 202 small groups would take part in constructing it and how this project would connect with the theme and with the Scripture they were studying that day.

Below is a step by step account of how the balloon ebenezer was constructed. While this project was grand, you may find a way to adapt it in a smaller or different way for your own worship or congregational activity.

Goat fencing was cut into 3 square by 12 square sections. 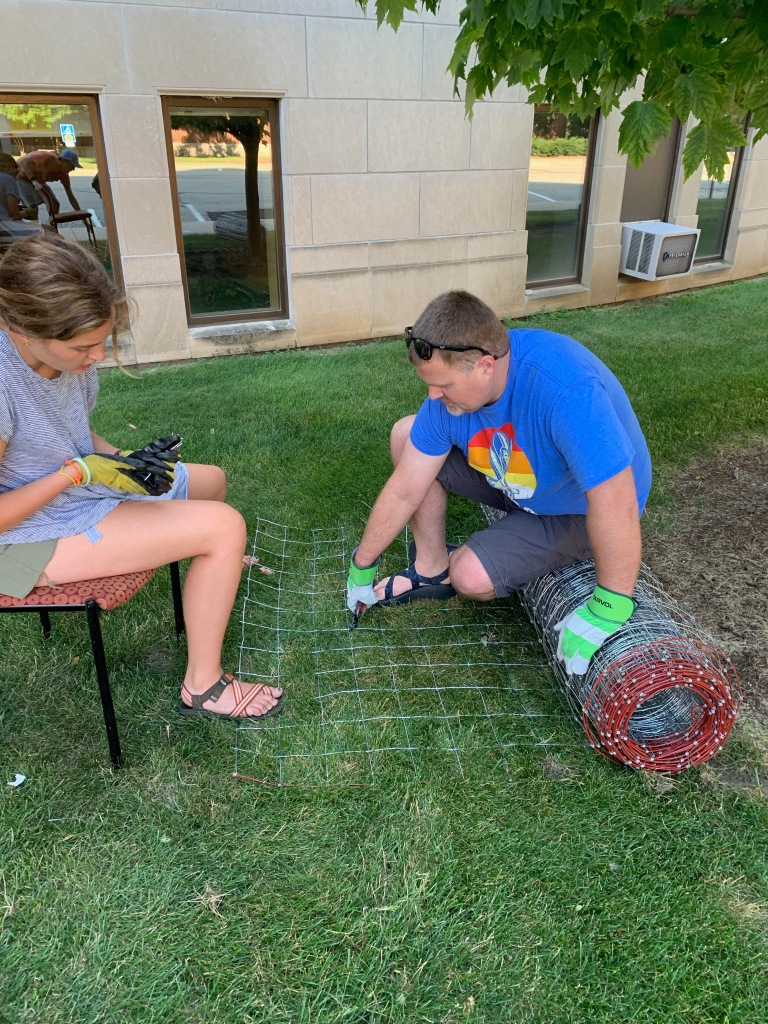 Each panel was then labeled so that we could later track where the panel fits into the larger framework when all 202+ panels are put together. Each panel was given a certain number of colored balloons associated to their label along with a pattern that each small group had to follow in order to put the colored balloons in the right order. 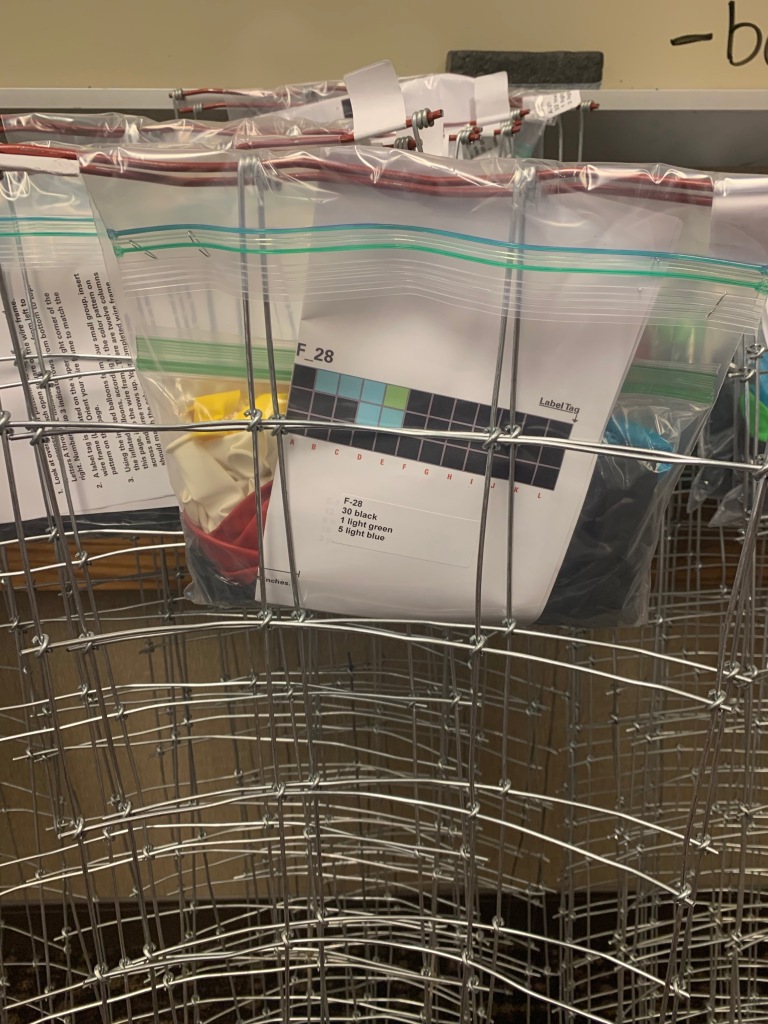 In small group, participants were instructed to write a prayer of help either on the balloon or on a piece of paper and inserted into the balloon. The balloon needed to be blown up to 5″ circumference or the size of a small cantaloupe in order to fit into the 4″ x 4″ square.

At the end of small group time, youth were instructed to transport their balloon ebenezers to the Hall of Music. We did not divulge how these ebenezers would be used in worship. We expected that these ebenezers would not come in perfect condition, meaning there would be some with popped balloons, missing balloons, balloons out of order, balloons too big or inserted incorrectly. We accepted ebenezers just as they were, no matter what state.

Here’s a picture of over 200 ebenezers waiting to be assembled. The panels were organized according to their label. For example, all the A’s were together, all the B’s were together. This way, we could see if there were any panels missing.

We spent 1 1/2 days in balloon purgatory, where we corrected panels that were out of order, replaced popped balloons, resized some overblown balloons, etc. I will admit that this is the moment when you simultaneously regret beginning this project and sit in anticipation for the final result.

The next row would be attached using small carabiners. Slowly, very slowly, you could see visible progress.

As each panel was added, there were lots of opportunities for problem solving and letting go of whatever preconceived ideas we had. I had to let go of my desire for each panel to have uniformly shaped balloons. There were some panels that I nicknamed “Fruit of the Loom” because the balloons were busting out of the fencing. There were times when after a panel was finished, balloons would pop, sending me to Party City for the third time until I bought them out of balloons. Towards the end, I could have cared less. We had to get creative as balloons were running out, fatigue set in, and worship start time was approaching.

In the end, those imperfections made the final product better, showing that it truly was communal art created by 4000 youth, 202 small groups, countless college work crew, and staff. What started out as 4000+ individual colored balloons filled with individual prayers was constructed into 200+ little ebenezers and further connected together to make one huge ebenezer – resulting in the theme logo.

The final result was breathtaking as you can hear when the ebenezer was finally revealed to all the youth in worship.